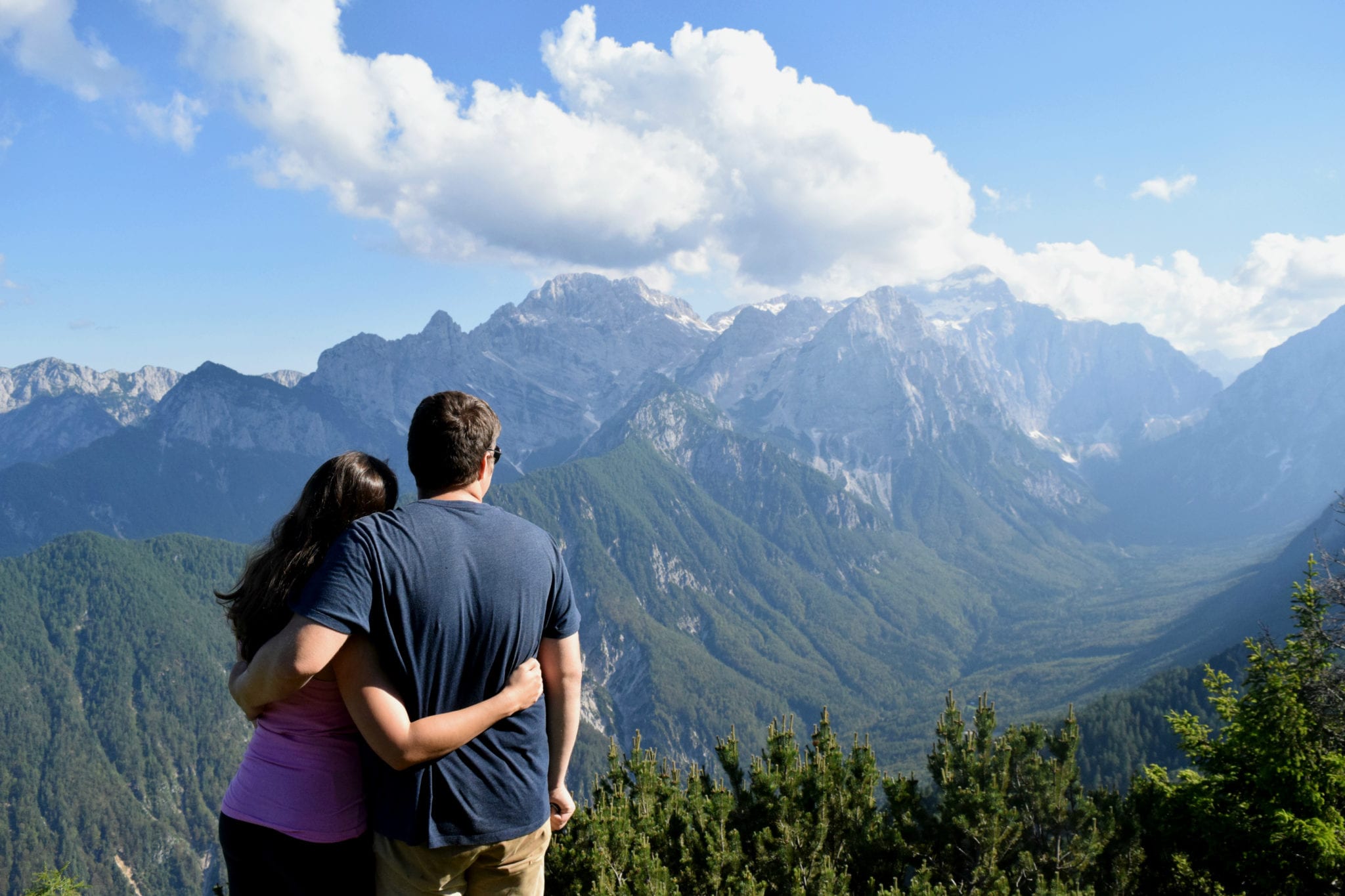 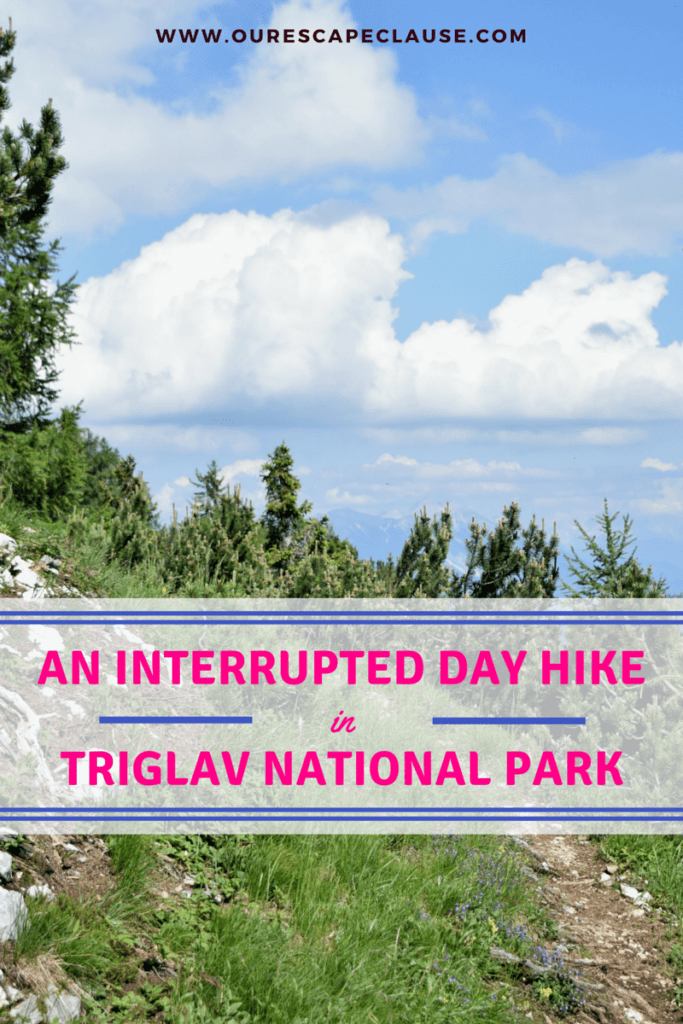 How’s this for a sentence that I never planned to type: after almost 4 hours of hiking, Jeremy and I were within 30 minutes of a spectacular summit when we were blocked from reaching it by a herd of cows.

Yes… cows. A herd of cows on a mountain kept us from reaching Vrtasko Sleme (also known as just “Sleme”), the would-have-been majestic summit of our full-day hike in Triglav National Park. I still can’t quite believe it, to be honest: it’s just such a random event.

But, I am getting ahead of myself–because really, the cows were just the cherry on top of a hilarious, physically demanding and adventurous day. 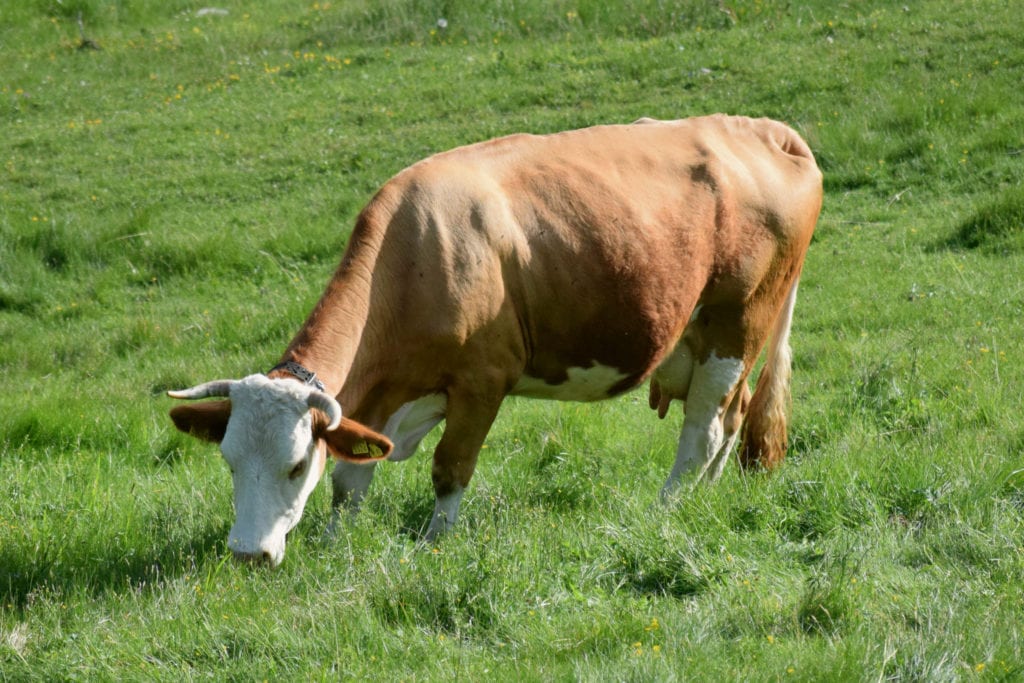 The hike to Sleme begins just outside of the village of Mojstrana, near where we were staying. It starts on an unmarked foot path that is barely visible through the overgrowth, leaving new visitors like us to simply guess that it is correct based on vague descriptions of its location.

The ascent is constant and unforgiving: for hours, we were climbing directly up, up, up–there is very little infrastructure, lots of slippery leaves coating the ground, and no switchbacks until a couple of hours in. We were silent for the beginning of the trail: there was nothing but trees, carefully deciding where to place our feet, and the sound of our heavy breathing.

After a couple of hours, we started to be rewarded for our diligence with intermittent views of the village of Mojstrana below us, and beautiful Mt. Triglav opening up before us. The higher we got, the more majestic the views became. 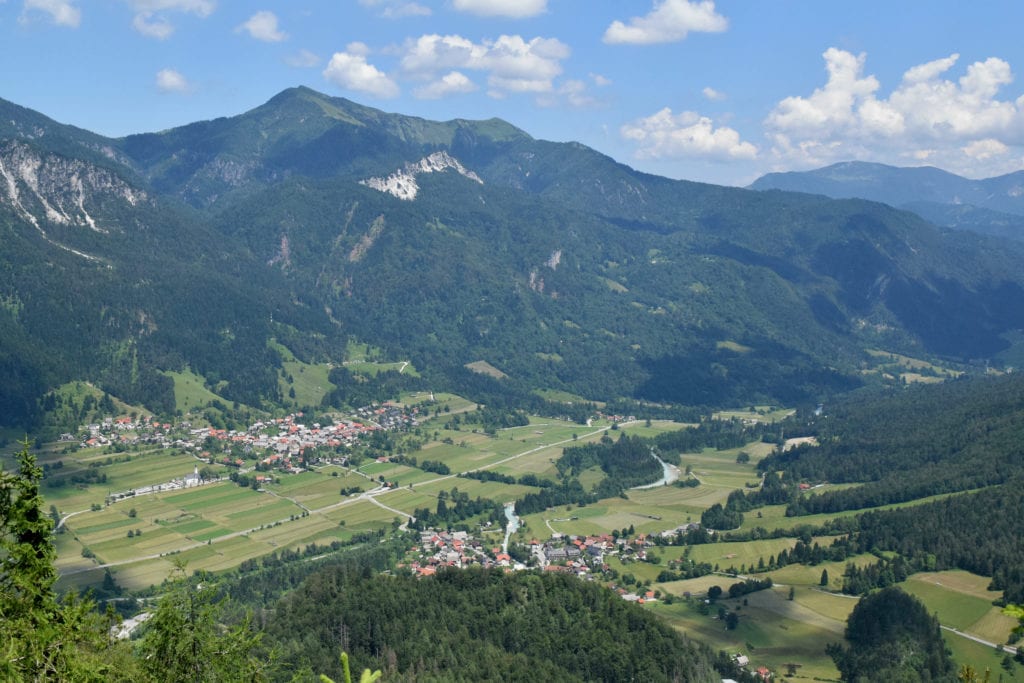 “This will be worth it,” I told myself firmly with every step that sent my quads into a rage. “The end view will all be worth it.”

The trail does eventually even out temporarily. There’s a short reprieve to cut into the mountain, away from the ridge we were following most of the time.

The good news is, there is a break from the hills. The bad news is, it’s easy to make a wrong turn–which we did. Luckily, we caught it within a few hundred yards, but while the trail is marked, it’s far more obvious in some places than others.

The break doesn’t last long: very quickly the trail leads back to the ridge, with a sheer cliff on one side, death-by-hitting-a-thousand-trees-on-the-way-down on the other (guard rails were present maybe 20% of the time, and loose rock was constant–it wasn’t terrifying, but caution was a must).

Eventually, we came across this view on a small turn out: 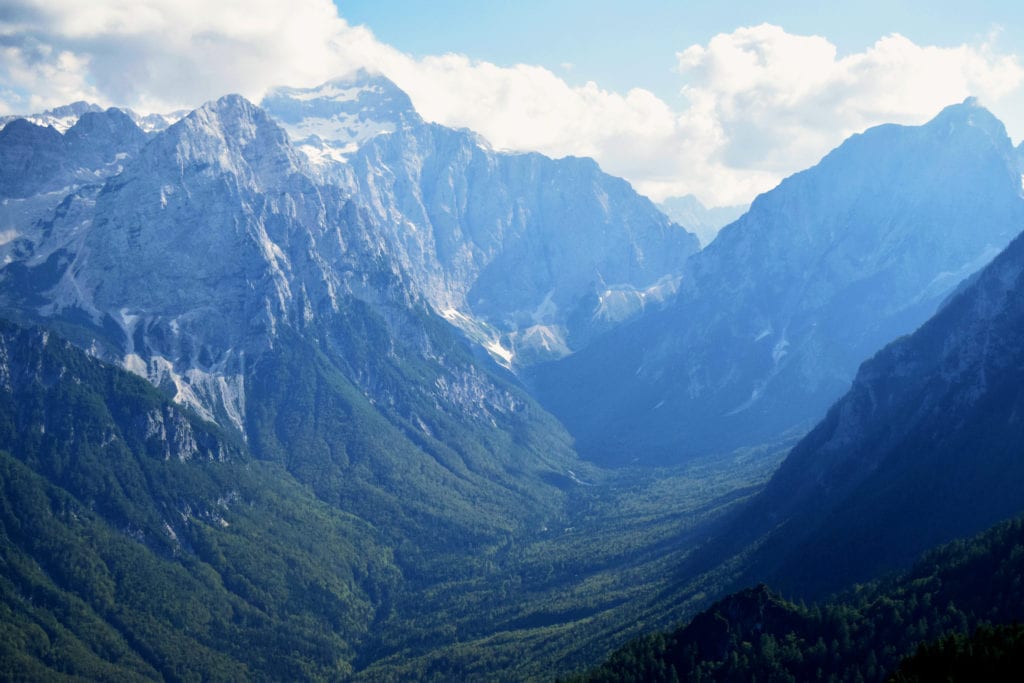 It. Was. Incredible. Really, this is one of the best views we have had on our RTW trip so far. I really can’t underscore how spectacular it is: I would hike this trail 10 more times to see it again.

Even better, once we got to this view, we knew we were close: Sleme was supposed to have a similarly amazing view of the Vrata Valley, along with a view of the valley on the other side of the mountain. We were excited, the trail evened out considerably, and we were booking it with a newfound determination and thirst for mountain views.

And then… the cows. The unforgettable, adorable, infuriating cows. 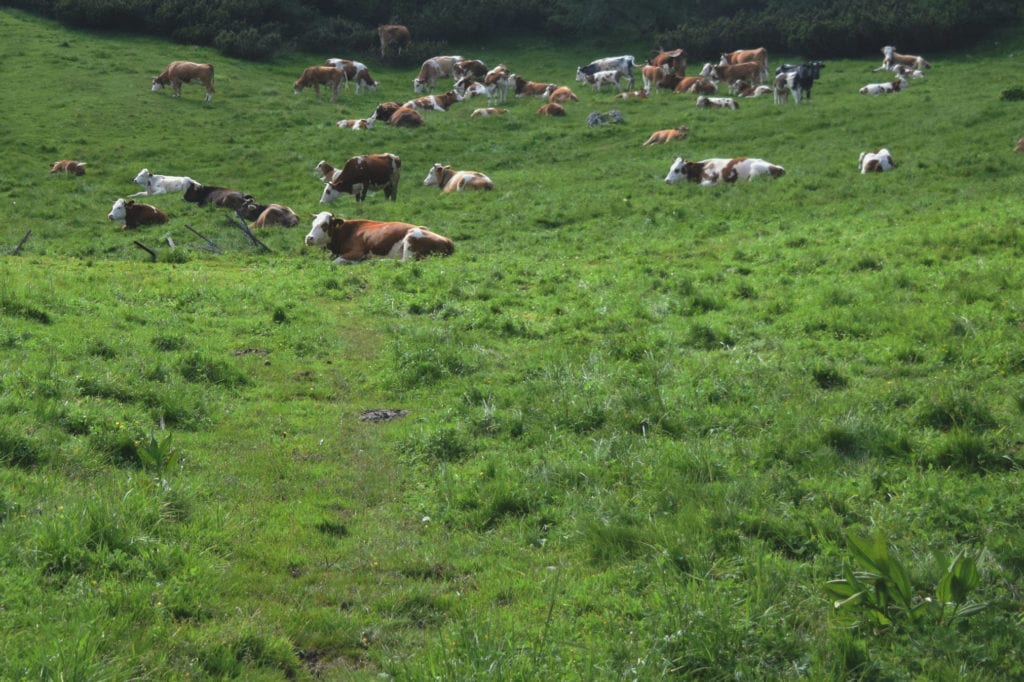 Not just any herd of cows, either, but a herd of nursing mothers with their calves, and therefore potentially the most territorial form of animal, regardless of species.

I didn’t care, at first: there was a trail marker literally painted onto their water trough, so obviously the cows lived here and were used to hikers passing through. We could see clear across the field to where the trail disappeared into the bushes, and all we needed to do was get there.

Jeremy was less convinced, but we pressed on–we moved slowly, hoping not to startle anyone. Most of them couldn’t have cared less about our existence, as I expected–gave us a few looks, and then promptly went back to their cud, udder, and/or nap. 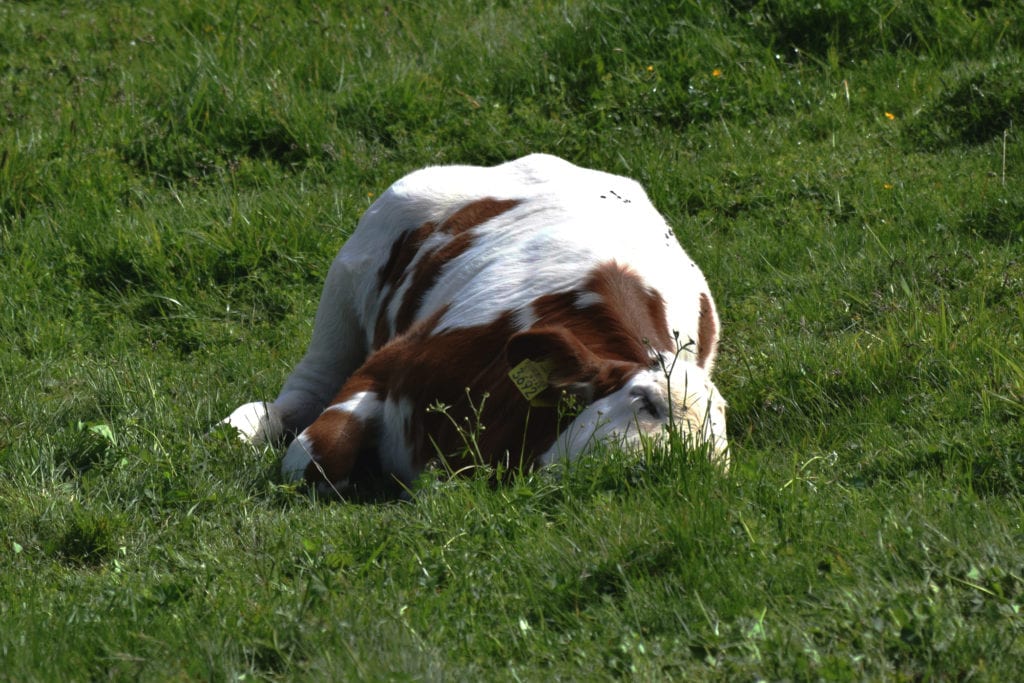 But alas, our good luck was almost up: a cow standing directly in between us and the trail decided that she was NOT HAPPY about the nearby humans. She fixed her giant brown eyes on us and started mooing aggressively–not playfully, not happily, but this guttural, over-and-over-again noise that clearly meant we were to back off.

This was a fairly wide field, but on one side was a cliff, and the other side was this: 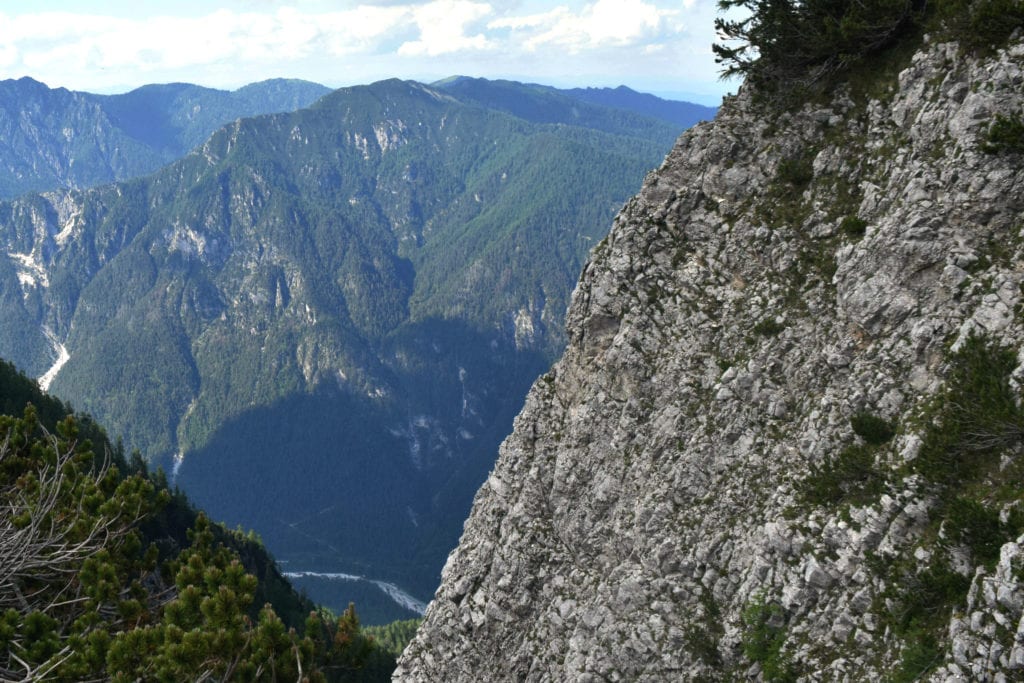 Which, I’m fairly certain is a hint of the view we didn’t get to have, but certainly not a path forward.

We tried everything: cutting through some bramble. Waiting them out. Eventually, after everyone in the field adjusted to the presence of the two anxious bipeds, we tried walking directly through again–this time with success.

Oh, hooray! Excitement! Joy! We were going to summit after all! 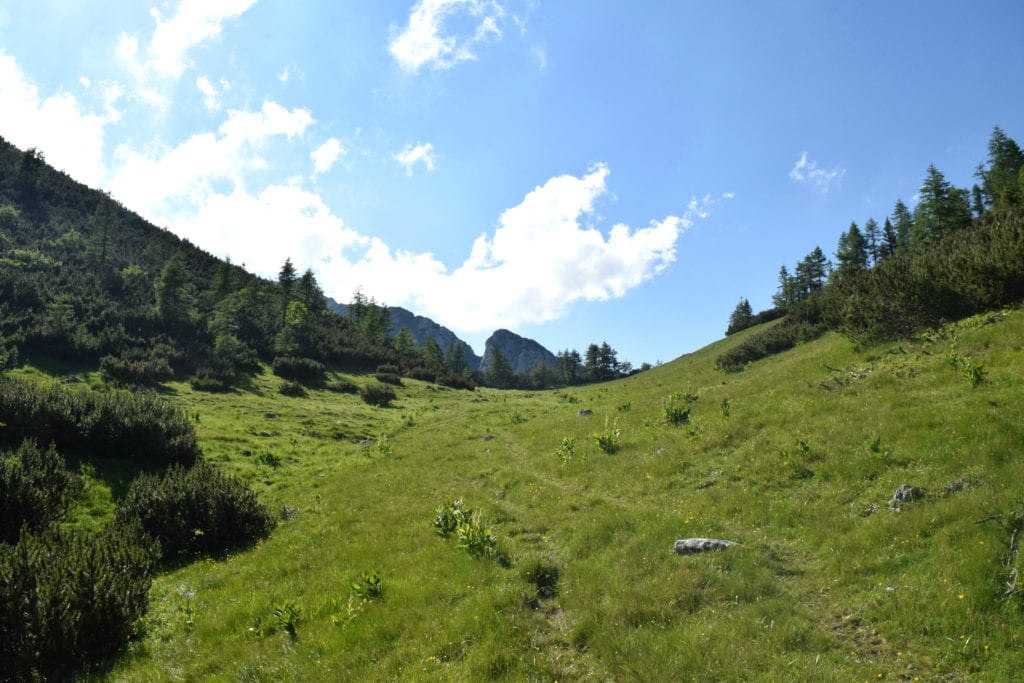 Because, as it turns out, the bushes that line either side of the narrow trail are apparently incredibly tasty. Within the trail itself were 3 eating cows–one literally in the bushes, and two standing side-by-side facing away from the field, with their furry butts taking up every last inch of passable space.

There was literally no way past them that we could find. Short of pushing up against giant, unknown animals–we were stuck. And, even if we miraculously managed to wait them out, we were now more than a little bit concerned about not being able to get past them on the way back down.

After almost half an hour of waiting, strategizing, and experimenting, we surrendered to the mighty cattle: it was time to go back. 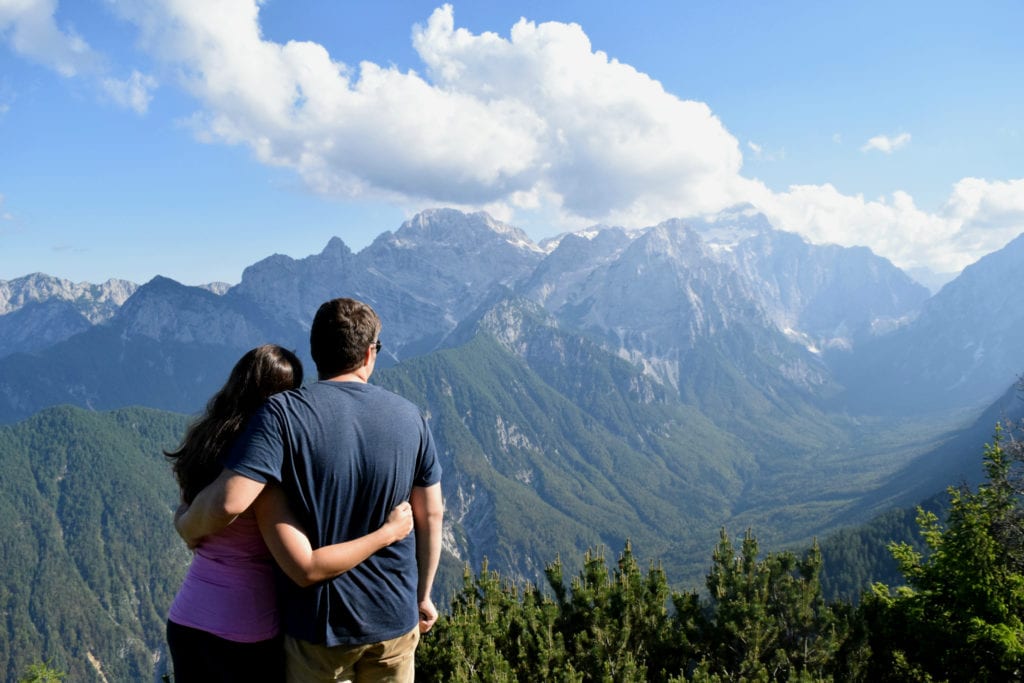 We did pause on our descent to overlook and photograph the Vrata Valley some more. I do truly believe that view alone was worth the hike, but that doesn’t lessen my frustration with the bovine.

But, alas. We win some, we get taken down by utterly unexpected opponents on some. At any rate, we still hope to do more hiking in Europe one day, and the cows made our (attempt) to hike to Sleme completely memorable.