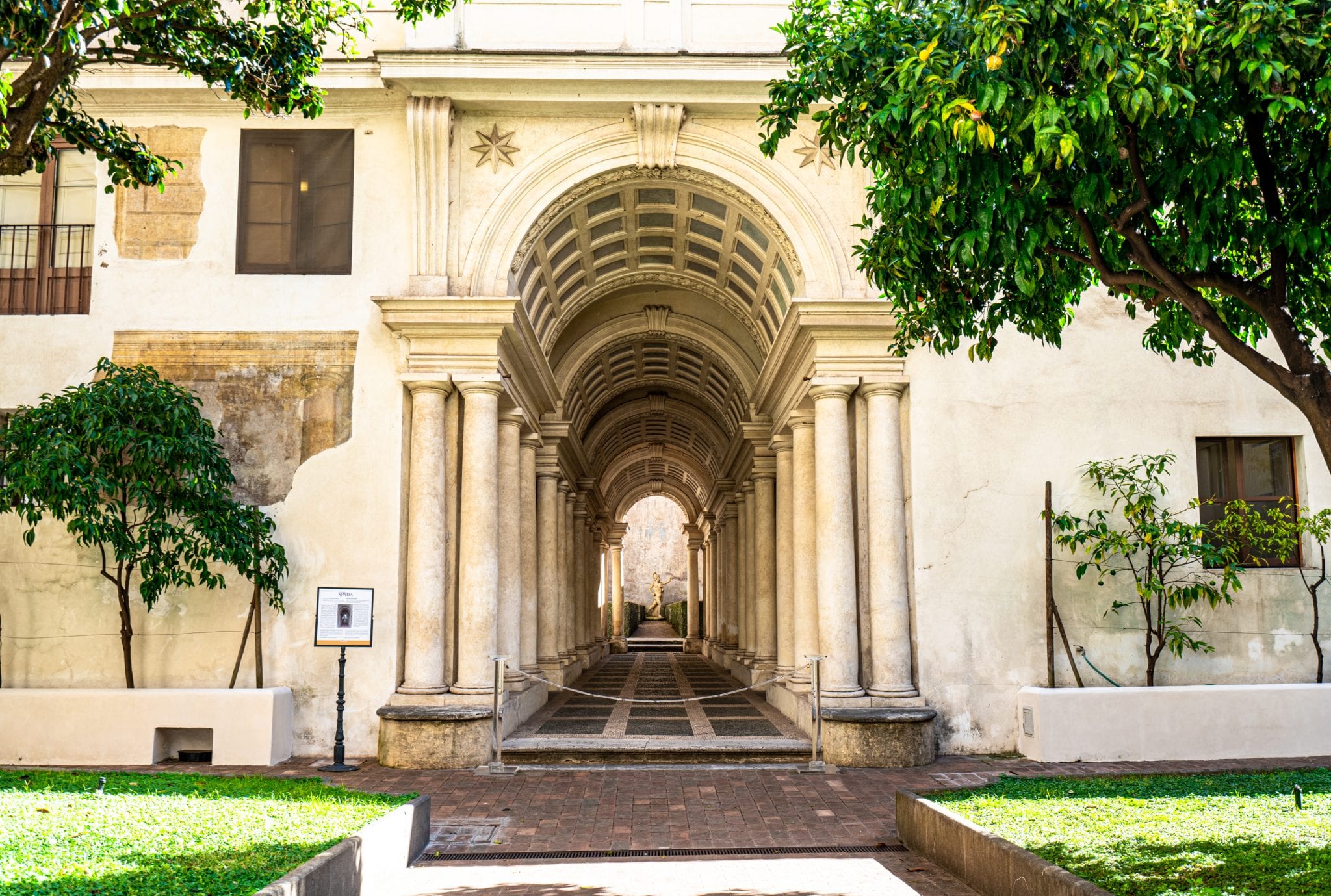 Located a mere two-minute walk away from the Campo de’ Fiori, stepping into the beautiful and peaceful Palazzo Spada is like entering another Rome: one without crowds, without lines, without the noise and bustle of tourist attractions… but with all the same opulence and beauty.

Small and delightful, a visit to the Galleria Spada is an excellent option for a Rome visitor looking to get off the beaten path a bit without having to physically travel far at all.

Here’s why (and how) to visit.

A Brief History of Palazzo Spada

Built during the 16th century, beautiful Palazzo Spada came under the control of Cardinal Bernardino Spada in 1632, who then began assembling an impressive art collection and commissioned Francesco Borromini to make alterations to the palace.

It’s at this point that part of the Palazzo Spada began to be transformed into the art gallery we know it as today.

Borromini made many alterations to the building itself, with his forced perspective gallery from 1653–more on that below–being by far the most famous (though still relatively unknown among modern visitors to Rome).

In 1927, the Italian government purchased the palace, and today the bulk of it is used by the Italian Council of State.

Four rooms, however, have been set aside as the Galleria Spada–and that’s the portion we can visit today.

Galleria Spada is housed in four rooms on the first floor of the palace, and consists of the art collection assembled by Cardinal Spada, his brother, and his nephew.

The collection is magnificent, focusing on 16th and 17th art and including works by Caravaggio, Titian, Guido Reni, and many others.

READ NEXT
Inside Galleria Sciarra, The Trevi Fountain's Secret Neighbor

Though the museum is small, it’s also incredibly peaceful: since a very small percentage of Rome’s visitors ever make it to the Palazzo Spada, the gallery is a very relaxed place and a calm in the storm of Rome’s often crowded art collections.

Once you finish exploring the Galleria Spada, it’s time to head back downstairs to the garden, where the most famous portion of the Palazzo Spada can be observed: Borromini’s forced perspective gallery.

Francesco Borromini’s Baroque masterpiece of illusion is the best-known feature of the Palazzo Spada, and an impressive trick for the eyes.

When standing at the edge of this colonnade (you can’t enter it for preservation reasons), you have the perspective of standing at the end of a long corridor–but this is merely an illusion.

The gallery is merely 9 meters long, and that statue that looks like a full-sized man at the end? He’s only 90 centimeters (about 35 inches) tall.

Even the bushes on either side of the “garden” are an illusion: Borromini carved them out of stone, not trusting a gardener to get the measurements exactly right.

As you reach the end of the gallery, the floor rises and the ceiling lowers subtly, with the columns shrinking along the way–so what looks like it’s merely a function of distance, is actually a function of size.

Personally, we felt the illusion was most effective when standing a bit further back from it–knowing what to expect going in, it was fairly easy to “force” our eyes to see through the illusion.

I half-wished we could have gone in knowing nothing about it, but the courtyard of Palazzo Spada isn’t something you’re likely to accidentally stumble into as a tourist!

How to Visit the Galleria Spada

The Galleria Spada is located toward the back of the Palazzo Spada: if you walk into the palace from the street, you’ll walk directly through the courtyard used by the Italian Council of State, and then see signs for the Galleria Spada start to appear.

The entrance will be on the left: if you hit the bathrooms, you’ve gone too far.

Tickets are 5 Euro/person, and the Galleria Spada is free to visit on the first Sunday of each month.

While how long to spend in a particular art museum is definitely a matter of personal preference, we were comfortable with about an hour here.

Click here to explore all of our Rome posts!