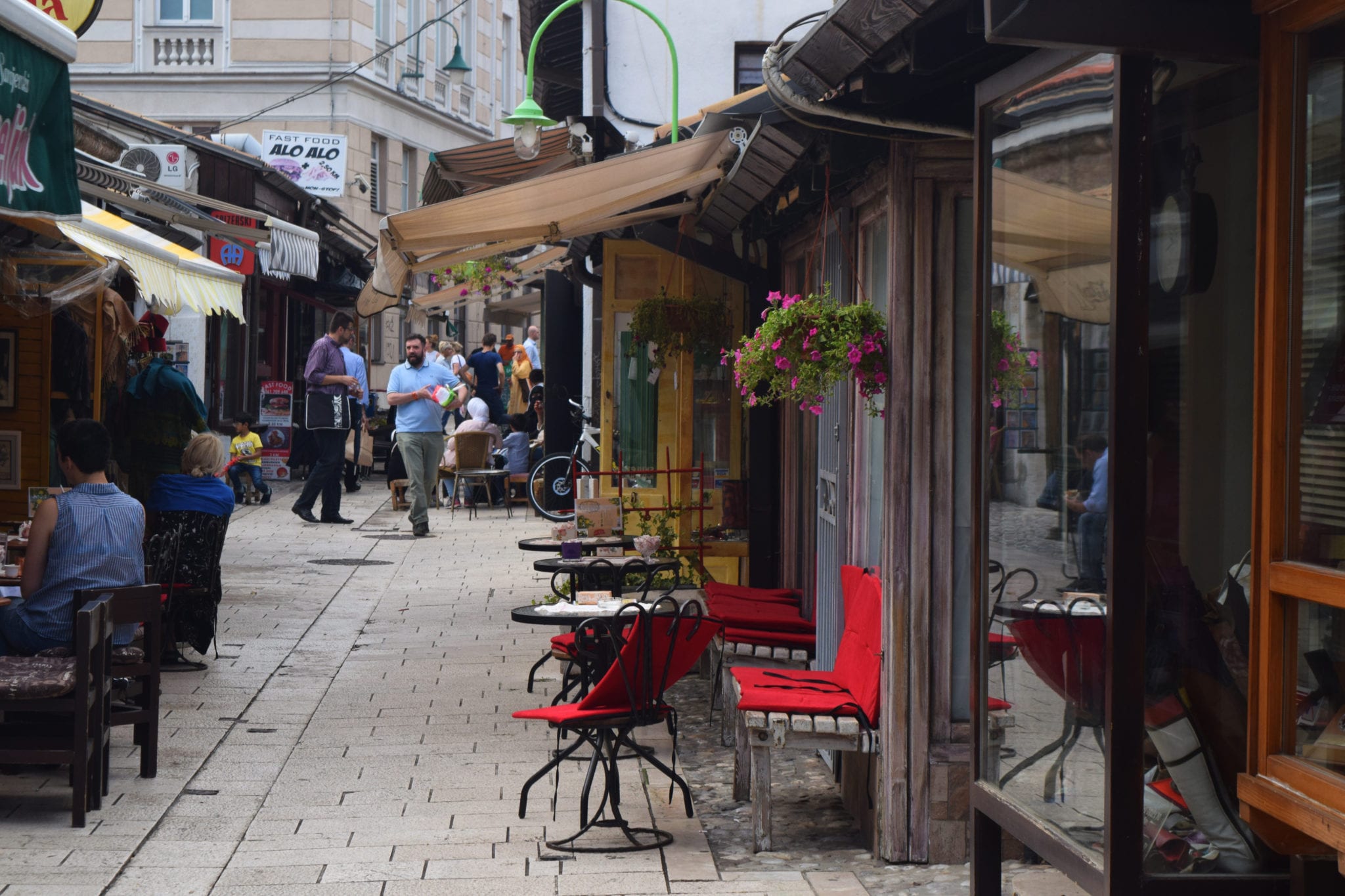 “It’s Sarajevo in here!” was a common phrase that I heard throughout my childhood. In the 90s, at least where I lived, “Sarajevo” became shorthand for all things messy, busy, chaotic, and out of control–at that time, Sarajevo was a city under siege.

I’ve wanted to go there ever since: to me, Sarajevo became synonymous with adventure, a far-off place that had seen and survived a recent war, and was full of history and intrigue.

Sarajevo did not disappoint. Despite the fact that it rained almost the entire time we were there, Jeremy and I loved the bustling capital, so different from any European city that we had seen before, and found tons of fascinating things to do in Sarajevo. 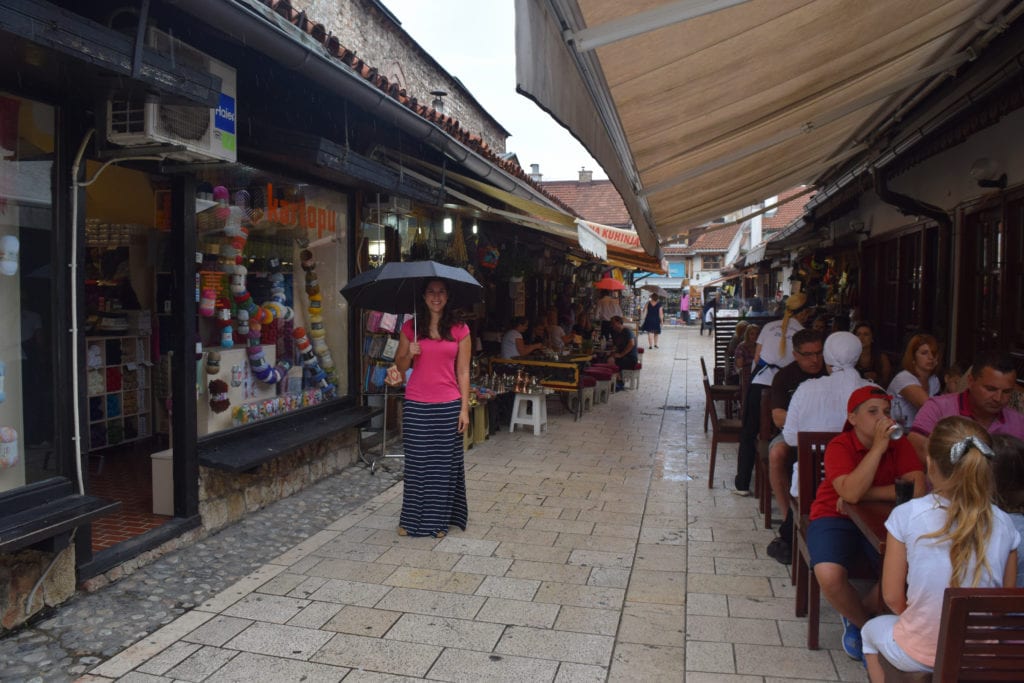 Though Sarajevo wears its recent, bloody history more subtly than Mostar does, you can still feel it oozing underneath the surface. Sarajevo simply has so much other history competing for attention, that the breakup of Yugoslavia becomes one chapter of the narrative, rather than the dominating storyline.

Go to Sarajevo. Whether you’re touring mosques or checking out an abandoned bobsled track, it is impossible to be bored in this fascinating city.

While you are there, make sure that you check out these nine amazing things to do in Sarajevo!

Spectacular Things to Do in Sarajevo 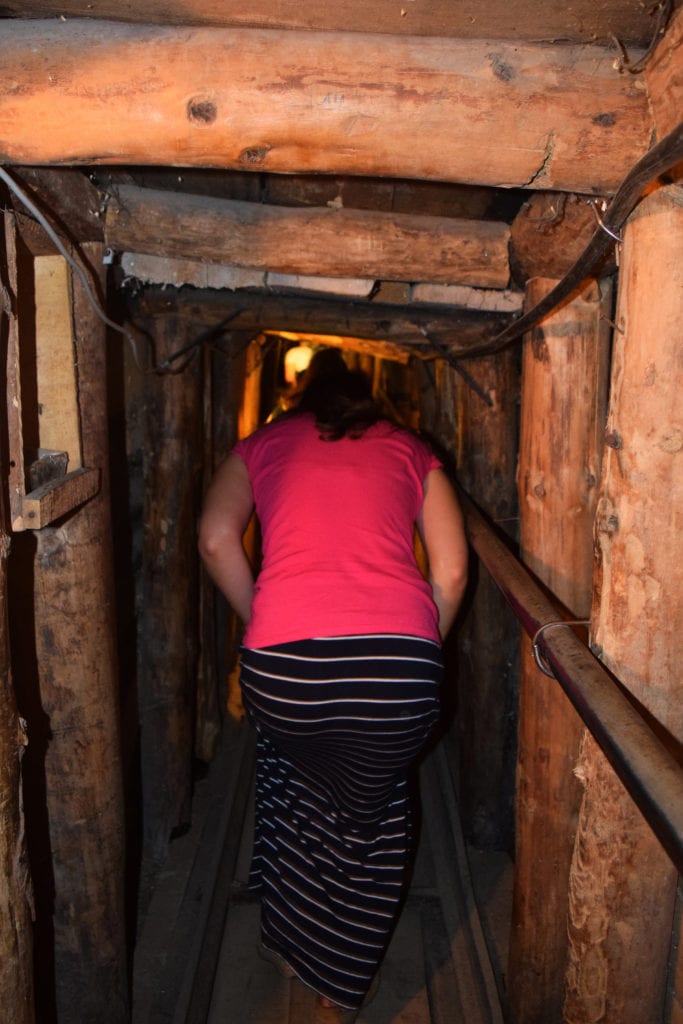 The museum was more impactful than I imagined it would be: in the footage of the men digging the tunnel, there were all ages shown. I was drawn to the young ones, though–the early-to-mid-twenties men who were busy digging tunnels to assist a war effort. They reminded me of my dad, who was a similar age at the time but living a vastly different life (building a career, playing with me), in no small part due to the luck of being born in Ohio instead of Sarajevo. 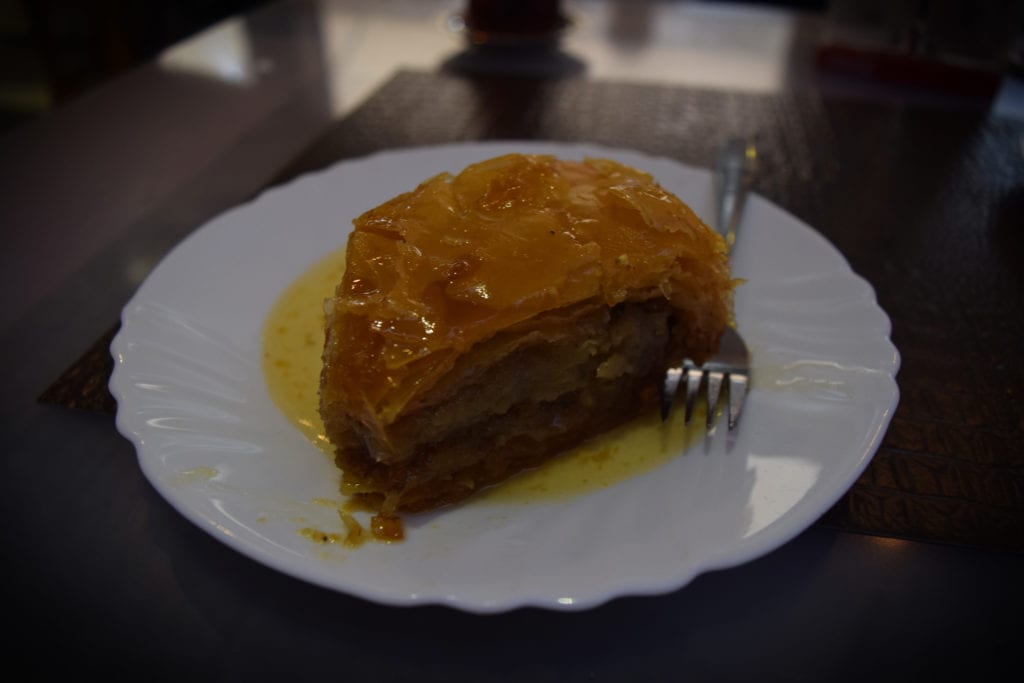 3. Explore the Old Town of Sarajevo.

Sarajevo’s Old Town is one of the cutest that I’ve seen–it reminds me of a village that a Disney cartoonist would draw. Wherever you turn, people are selling everything from teapots to Bosnian SIM cards. Wandering aimlessly around it was one of our favorite things to do in Sarajevo. 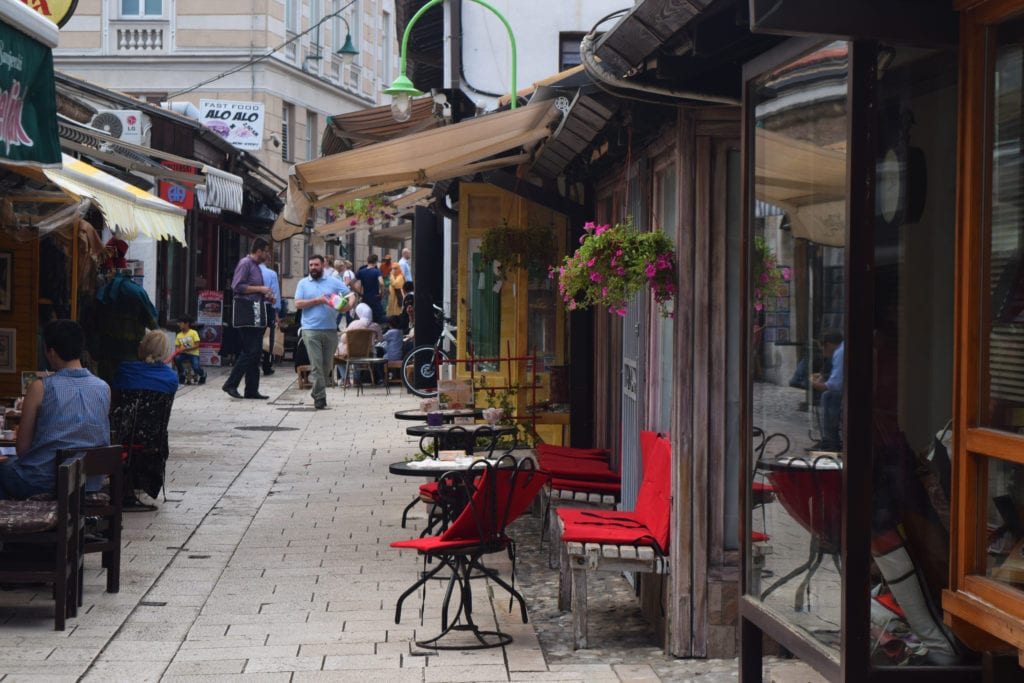 4. Walk across the Latin Bridge.

Before the siege of Sarajevo, the city was already famous for another war: the start of World War I. Steps away from the Latin Bridge, Arch Duke Franz Ferdinand, heir to the Austro-Hungarian empire, was assassinated, kicking off a global conflict.

This is a place that you can feel history beating down on you. 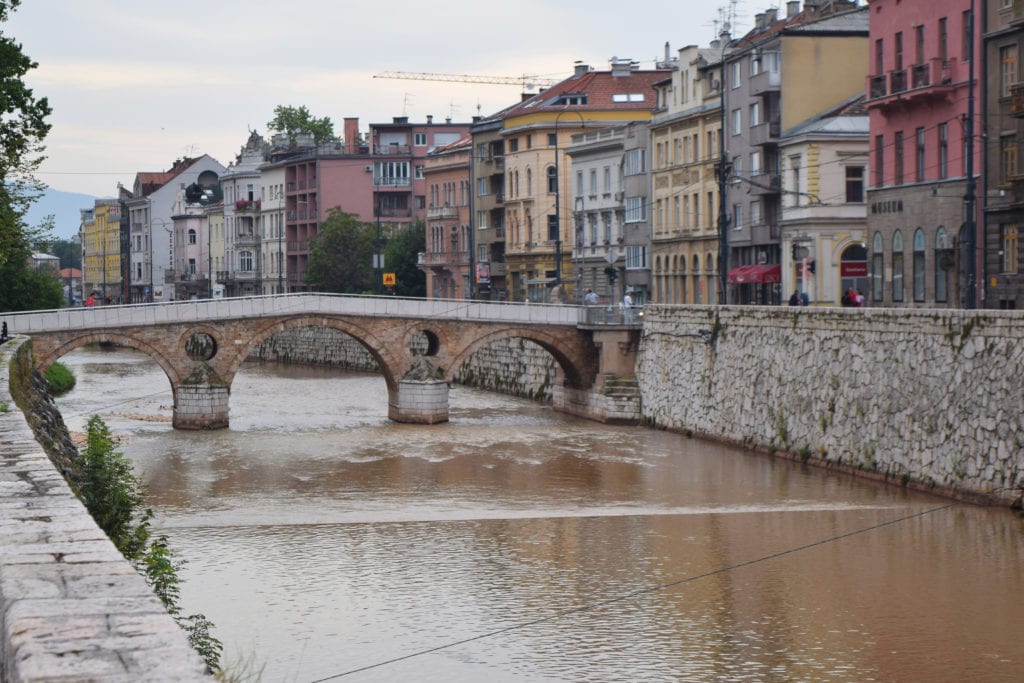 Our Airbnb host was the first person who used the phrase “cake shop” with us, but we heard it several times in Sarajevo–it would appear that Bosniaks eat cake the way Italians eat gelato, and the cakes are delicious.

Read Next: The Scarred City: Things to Do in Mostar (And Why You Should Go)

6. Look for the Sarajevo roses. 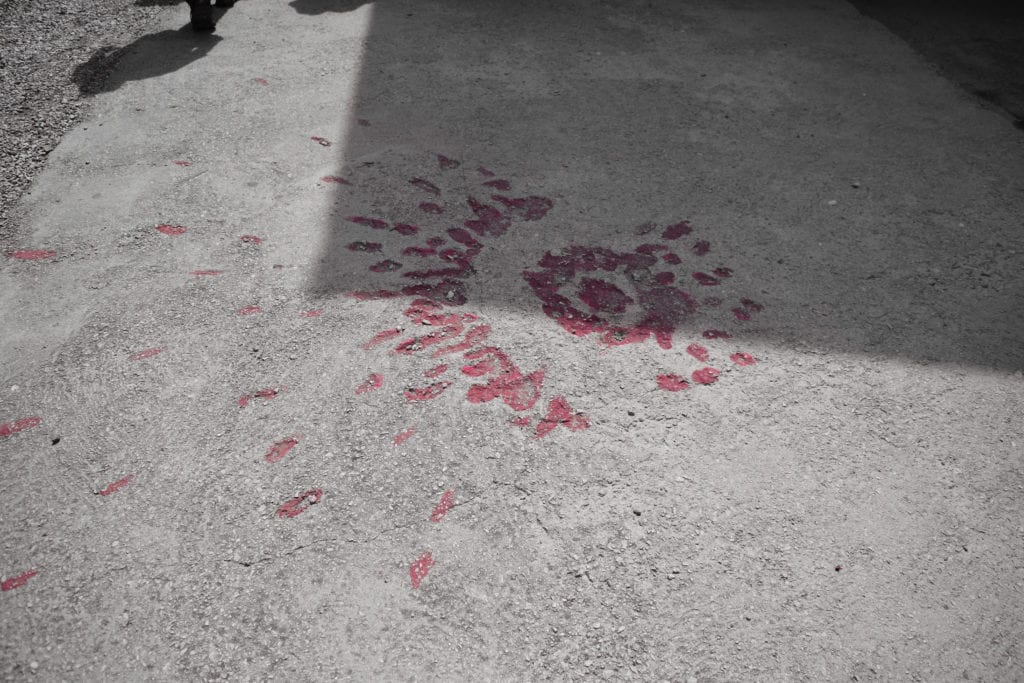 This mosque, in the center of the Old Town, dates to the 1500’s, and was gifted to the city (along with a large parcel of other lands and structures) to Sarajevo by Ottoman war hero Husrev-beg upon his death. 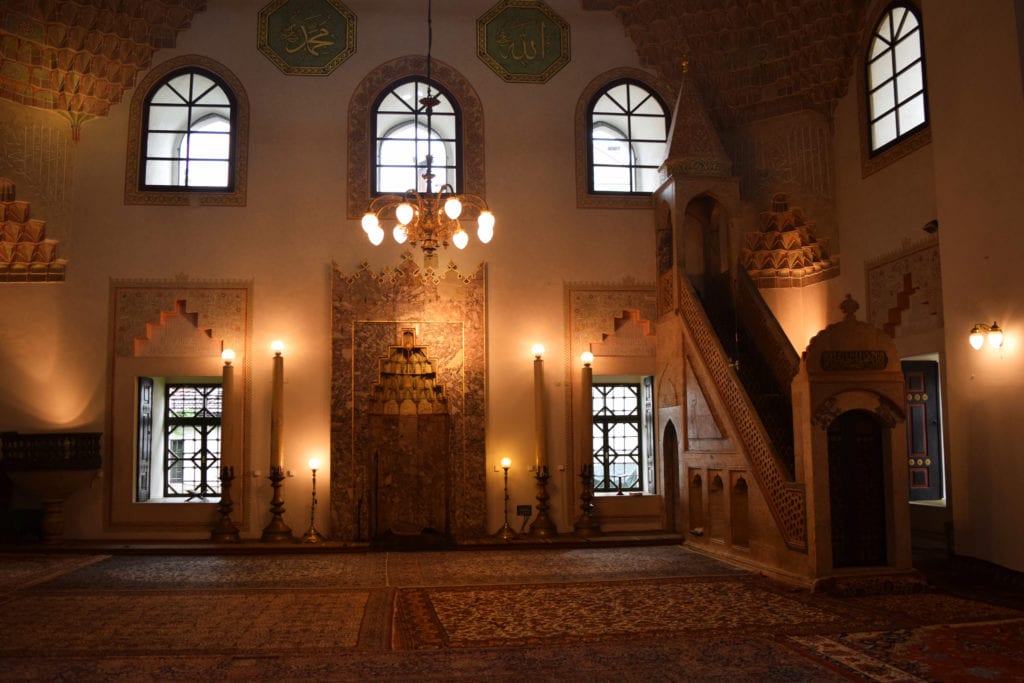 Our Airbnb host in Mostar swore that the best cevapi in the world was in Sarajevo. The dish consists of small sausages served with bread and raw onions–we found it tasty, but a little plain and not mind-blowing. Still, well worth trying when in the area!

On our next trip to Bosnia and Herzegovina, we’d love to spend far more time in Sarajevo–but also to go hiking, explore some waterfalls, and even head to the border to raft the Tara River Canyon. But for a first trip to Sarajevo, it’s clear we found plenty to do.

Some links in this post about things to do in Sarajevo are affiliate links. If you click through one of these links, we may earn a small commission at no extra cost to you. We are committed to only ever recommending products and services that we personally use and like.

4 thoughts on “9 Spectacular Things to Do in Sarajevo”