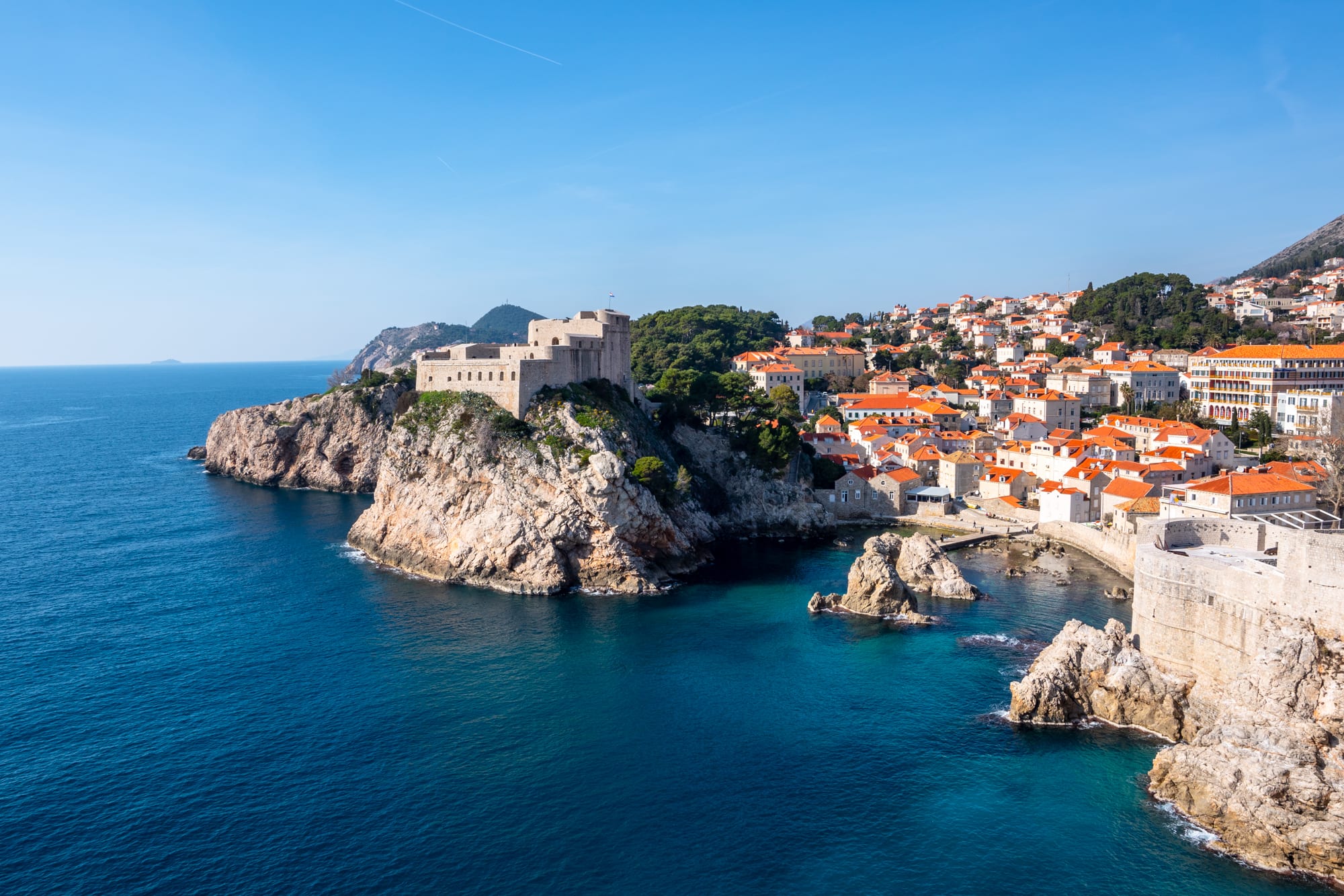 Home to stunning coastline, picturesque cobblestone streets, tasty food, and a gorgeous smattering of terracotta rooftops, there’s no doubt that both Dubrovnik and Split are gems of Croatia’s Dalmatian coastline–so if you’re trying to decide whether to visit either Split or Dubrovnik on your trip to Croatia, you have your work cut out for you.

We have visited both cities multiple times and love them both, but for very different reasons!

Here’s how we suggest choosing whether to visit Dubrovnik or Split.

… you want easy access to an abundance of island day trips.

Split is in a prime location to visit some of Croatia’s most popular islands via day trip!

Options include Hvar, the Pakleni Islands, and Brač, who’s Zlatni Rat beach is one of the best-known and arguably prettiest beaches in Croatia.

While Dubrovnik’s status as King’s Landing in Game of Thrones worked with several other factors to propel it to insane levels of international fame (and therefore tourism) over the past 10 years, Split has escaped some of that infamy.

Split is also a big of a larger city, giving tourists more places to stay, and the combination of its less famous status and larger footprint makes it a bit cheaper to visit than Dubrovnik (and you’ll have plenty of choices when deciding where to stay in Split).

Make no mistake, though: Split is also a cruise port, also incredibly popular, and also a Game of Thrones filming location.

Whether you ultimately decide to visit Split or Dubrovnik, you’ll be visiting a very touristy place.

… you want to go chasing waterfalls.

READ NEXT
Krka vs Plitvice: Which Waterfalls Should You Visit?

If exploring some of Croatia’s most beautiful waterfalls is on your list, Split is the Dalmatian city for you!

… the wonder of Diocletian’s Palace catches your eye.

In the 4th century, the Roman Emperor Diocletian retired and built himself a very nice retirement home along the Dalmatian coast.

While many palaces around the world are visited on tours and as standalone tourist attractions, Diocletian’s Palace is… not like that.

The palace, more or less, is Split’s Old Town, and you can wander through it at your leisure.

The cobblestone streets, temples, and other buildings that a Roman Emperor once called home are chock full of visitors shopping, having lunch, devouring gelato, and touring some of the palace’s ruins… some of which were recently home to Dany’s dragons (the palace played Meereen in GOT).

The views of Split from Marjan Hill and the Saint Domnius Bell Tower are beautiful and all, but they don’t hold a candle to the views of Dubrovnik’s Old Town and the Adriatic Sea from the Dubrovnik City Walls.

In pure looks alone, Dubrovnik is one of the most stunningly beautiful cities we have ever seen from above.

… you’d like to hop over to Montenegro for a day.

Want to add a visit to the gorgeous country of Montenegro to your itinerary?

That is incredibly easy to do from Dubrovnik, and well worth the effort!

The charming town of Kotor, for example, offers many similar attractions to Croatian cities like Split or Dubrovnik with comparatively with fewer crowds and lower prices.

… you’d like to stay in a more compact city.

Dubrovnik is simply smaller than Split, and if you stay in or near the Old Town, there’s an excellent chance that you won’t need to do anything other than walk to get around town or to Dubrovnik’s beaches during your stay.

In Split, however, this is not necessarily the case–ferries, buses, and taxis are much more likely to be a regular part of your visit to Split.

… you want access to better swimming within walking distance of town.

While the best swimming in Croatia can undoubtedly be found on the islands, Dubrovnik does have a few lovely pebble beaches within easy reach of the Old Town.

Split’s beaches tend to be a bit further away and garner more mediocre reviews (but then again, that’s what you day trip to nearby islands for!).

Visit Dubrovnik and Split for…

Particulars aside, Split and Dubrovnik have a similar architectural beauty to them.

READ NEXT
A Dazzling One Day in Dubrovnik Itinerary

Both cities are home to delightfully charming terracotta rooftops and smooth stone buildings, with plenty of colorful shutters and cozy outdoor cafes visible as you look up and down the streets.

Whether you choose to visit Split or Dubrovnik, you’ll be visiting a typical and beautiful Dalmatian city.

I’m sure it comes as no surprise, but as cities that sit right along the Adriatic, choosing to visit either Dubrovnik or Split will give you access to some incredible Croatian seafood!

Jeremy tends to order all the squid ink dishes he can get his hands on around here, and has enjoyed every last one of them.

… the need to contend with the annoying reality of cruise ships.

While Dubrovnik has developed quite a reputation for the uncomfortably intense crowds that descend on the city when cruise ships are in town, the truth is, Split has the same issue.

READ NEXT
15 Cool Things to Do in Zadar, Croatia

Yes, in Split they’re a bit more spread out (in other words, every. single. person. isn’t trying to walk the city walls at once), but you can still very much feel the impact in Split the moment the cruise ship passengers disembark for the day.

It is, unfortunately, simply the reality of traveling to Split or Dubrovnik, especially during the summer.

If you want to try to avoid the crowds, check the cruise ship schedules here to see how many ships will be in port during your visit (and to plan around them if you can).

Should you visit both Split and Dubrovnik?

In fact, if you have more than a week in Croatia, we heartily recommend not deciding whether to visit Split or Dubrovnik and simply head out to visit them both.

Both cities are fairly small and their major tourist highlights can be seen in a couple of days, so why not visit them both?

If you have less than a week in Croatia or prefer to base yourself in one spot for your entire trip–that’s when the hard decision of whether to visit Dubrovnik or Split comes into play.

Split or Dubrovnik: The Final Decision

At this point, we’ve visited both Split and Dubrovnik several times, and we fully intend to keep revisiting them both as long as we continue returning to Croatia (which, ideally, will be forever).

If we absolutely had to choose a favorite, we’d choose Dubrovnik for the city itself–it’s just simply too beautiful not to love, and we don’t mind the crowds much–and Split for the location.

Split’s easy access to beloved favorites like Hvar makes it the perfect base for wider explorations in Croatia, and that gives it an edge over Dubrovnik for visitors looking for a base for multiple day trips.

Ultimately, whether you choose to visit Split or Dubrovnik, you’re bound to fall in love with an absolutely gorgeous slice of the Croatian coast!

READ NEXT
Greece or Croatia: Which Coastal Getaway is Right for You?

Home to stunning coastline, picturesque cobblestone streets, tasty food, and a gorgeous smattering of terracotta rooftops, there’s no doubt that both Dubrovnik and Split are gems of Croatia’s Dalmatian coastline.

If you’re trying to decide whether to visit either Split or Dubrovnik on your trip to Croatia, you have your work cut out for you–but you also can’t make an incorrect decision.

6 thoughts on “Split or Dubrovnik: Which Coastal Croatian City is Right for You?”