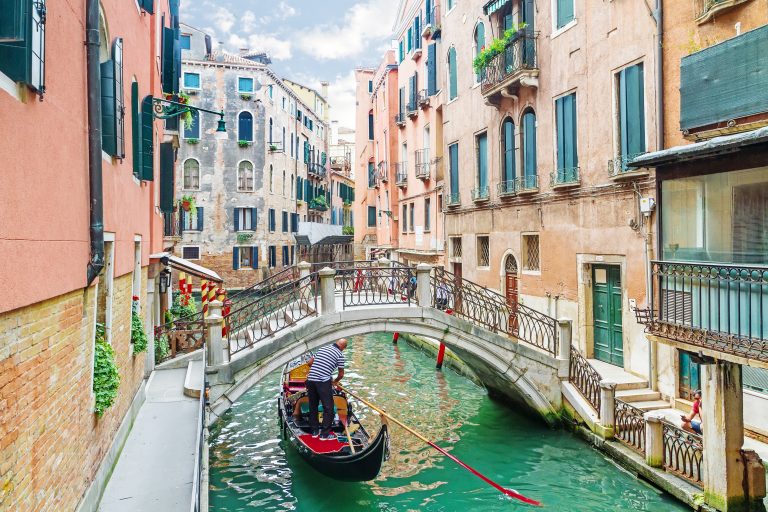 With its many canals, unusual topography, complex history, and incredible beauty, it’s no surprise that Venice has a tendency to capture the world’s imagination–and like many world-class cities, the more interesting facts about Venice that you learn, the more fascinating the city becomes.

Venice is a city of stories and secrets–here are just a few of them, including several fun Venice history facts! 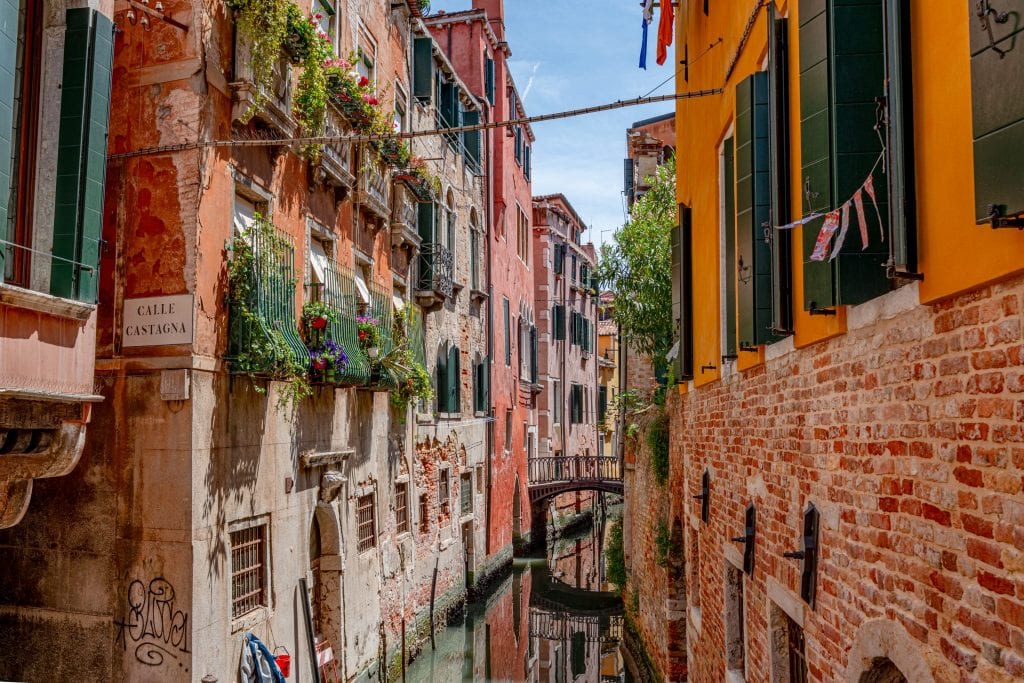 Venice was an independent empire for 1100 years.

Venice ruled itself up until 1797 when Napoleon took control of the city.

… but its peak was around the 14th century.

At its height, Venice ruled most of the Meditteranean, including the Greek island of Crete, the Croatian city of Zadar, and the island of Cyprus, among many others.

Venice also maintained a heavy presence in the then-Byzantine city of Constantinople and conducted trade with western Asia from the Black Sea. 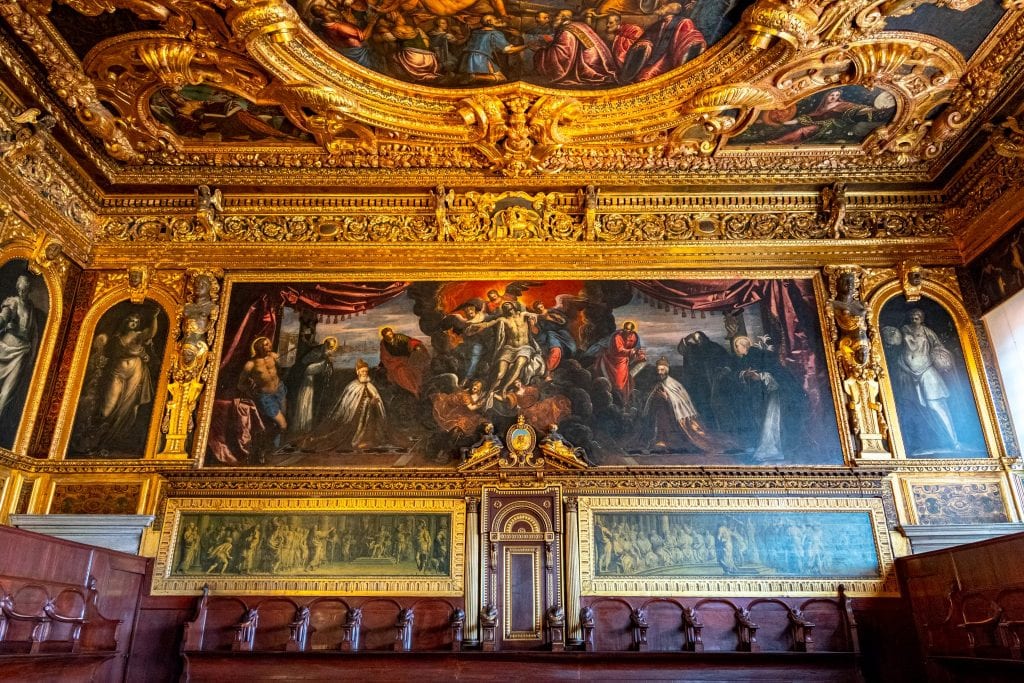 The Venetian Republic was not a monarchy.

Though the doge–the head of state in Venice–ruled for life, he did not rule by divine right or pass the office down through the family tree, both extremely notable in Europe at the time.

One of the most interesting Venice facts is that the doge ruled “by the will of the people”, and was elected by a series of committees (controlled, unsurprisingly, by the male members of wealthy Venetian families).

READ NEXT
The Ultimate 2 Days in Venice Itinerary

The famous Horses of St. Marks are not original to Venice.

When Venice participated in the Sack of Constantinople during the Fourth Crusade, they brought back the four bronze horses (which are actually made of copper) to Venice, where they stood overlooking St. Mark’s Square.

However, they didn’t start their life in Constantinople–Venice captured the horses in 1254, but they date to the 2nd or 3rd century AD, and possibly hail from Ancient Greece or Rome.

Since 1254, though, they have lived in Venice with one notable exception. In 1797, Napoleon took the horses and placed them on top of the Arc de Triomphe du Carrousel (the arc that faces the Louvre) in Paris, and then remained there until 1814, when they were brought back to Venice. 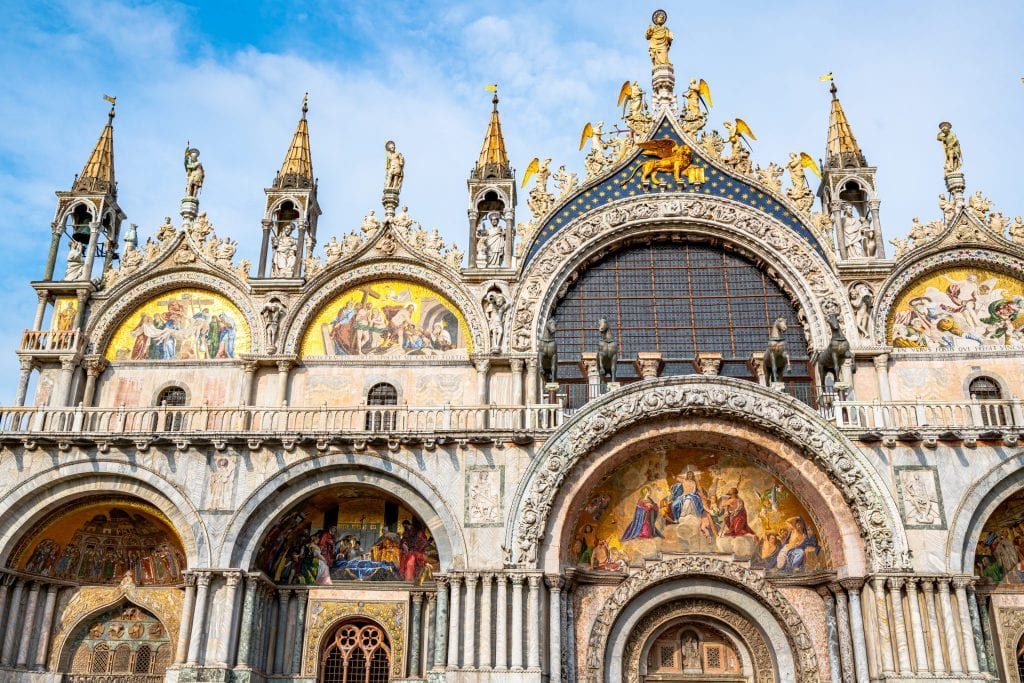 Touring the Doge’s Palace is one of the most popular things to do in Venice, but many visitors mistake its purpose before coming.

While the Doge did live in the palace, and you can choose to tour the Doge’s apartments while visiting, the main purpose of the palace was to act as a seat of the republic and visiting the Doge’s Palace generally focuses on touring the many grand council rooms, among other spots.

Venice was once one of the wealthiest cities in Europe.

… in part, because they simply had to be to survive.

Venice, for obvious reasons, was never a huge agricultural hub. By virtue of its topography, Venice needed to survive and thrive with trade, ship-building, and excellent business sense, all of which the empire excelled at.

READ NEXT
Venice to Burano: The Complete Guide to Visiting Burano from Venice

There are 118 islands in the Venetian lagoon. 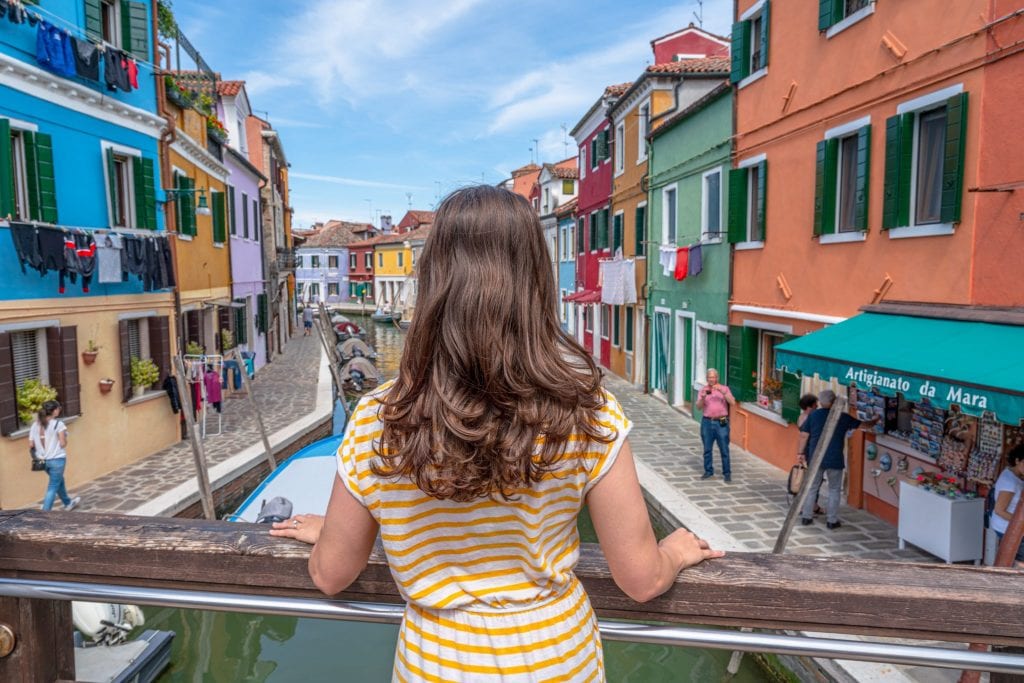 One fun fact about Venice is that over 400 footbridges help connect the various Venetian islands to each other!

You can find one of the narrowest streets in the world here.

Calleta Varisco measures a mere 53cm, or roughly 21 inches, across.

Venice is divided into six sestieri, or districts.

The most crowded and touristed of these are San Marco and San Polo.

Cannaregio, Dorsoduro, Santa Croce, and Castello tend to be a bit less crowded. 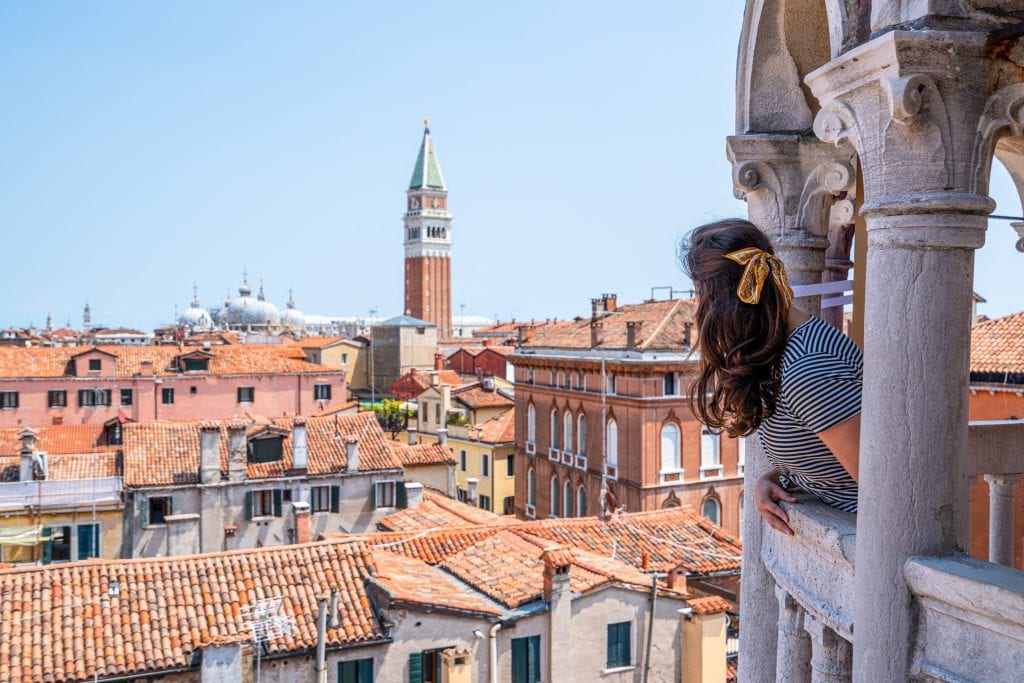 The city of canals is steadily sinking.

Though definitely not one of the most fun Venice facts, estimates suggest that the city is sinking at a rate of 1-2mm each year, though figures vary.

… and the impacts can be seen during semi-regular “acqua alta” events.

“Acqua alta” literally translates to “high water”–and while sometimes these seasonal floods are dramatic, often they merely look like a few inches of water standing in Piazza San Marco.

If you visit Venice in November or through the winter months, you just might experience one for yourself. 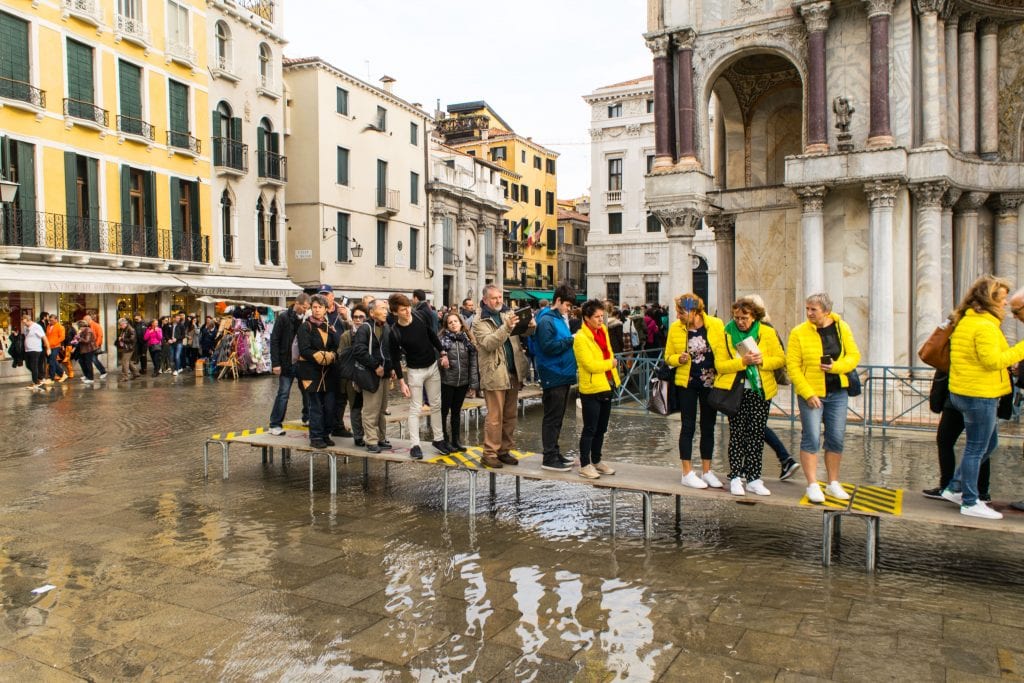 The beautiful, enclosed Bridge of Sighs is constantly admired by visitors to Venice, but its name is inspired by a different view–the one from inside the bridge looking out.

The Bridge of Sighs connects the prison with the interrogation rooms in the Doge’s Palace.

When prisoners would travel across the bridge to be interrogated, they knew it may be the last time–and so, the legend goes, they would sigh at the beautiful view of the Venetian Lagoon, as it was potentially the last chance they would ever have to see it.

Venice was built on logs.

Much of central Venice was built on top of enormous logs drilled underneath the surface of the water–and over 1000 years later, much of Venice still rests on this foundation! 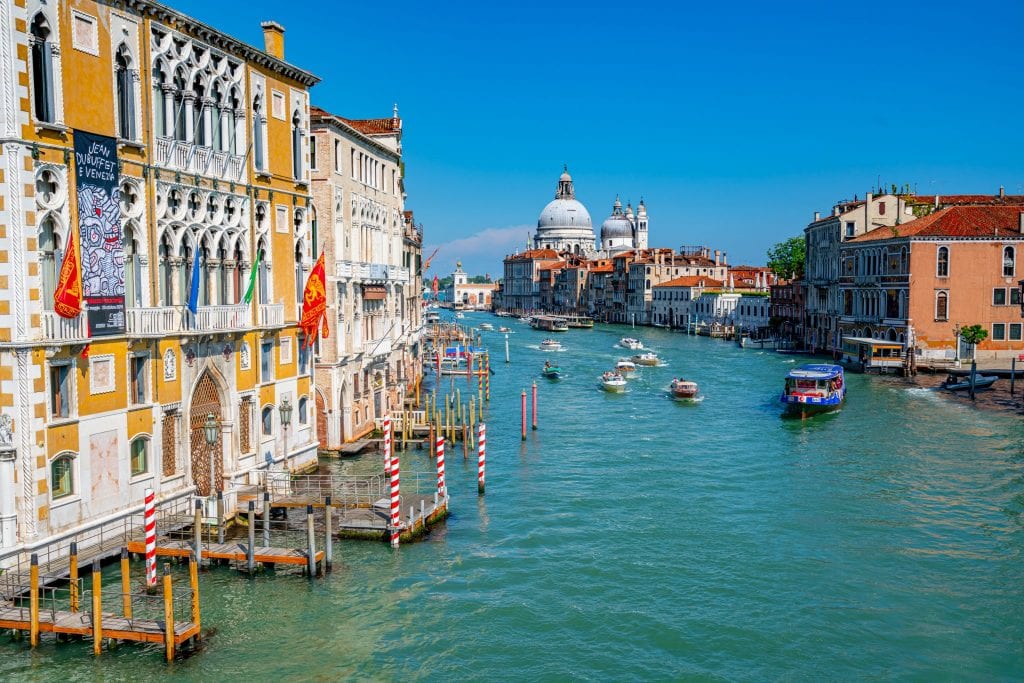 There are only 4 bridges over the Grand Canal.

… and the Rialto is both the oldest and the grandest.

The first iteration of a bridge on the site was the Ponte della Moneta, which dated to the 12th century.

The current version of the Rialto Bridge was built between 1588 and 1591. 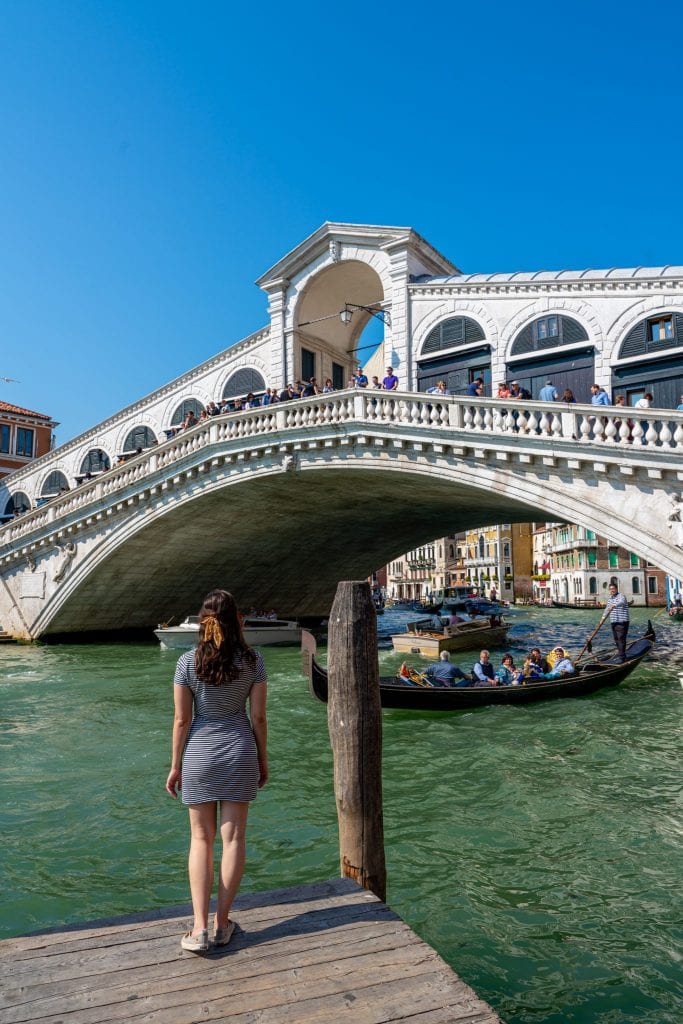 You can go to the beach in Venice!

While beach days aren’t at the top of most visitors’ lists of must-dos when in Venice, Venice Lido has a lovely stretch of beach to enjoy for those so inclined.

READ NEXT
What to Do in Venice at Night: 9 Fun Ideas

There are no cars in central Venice.

… and no bicycles, either. Getting around is best done on foot or by boat. 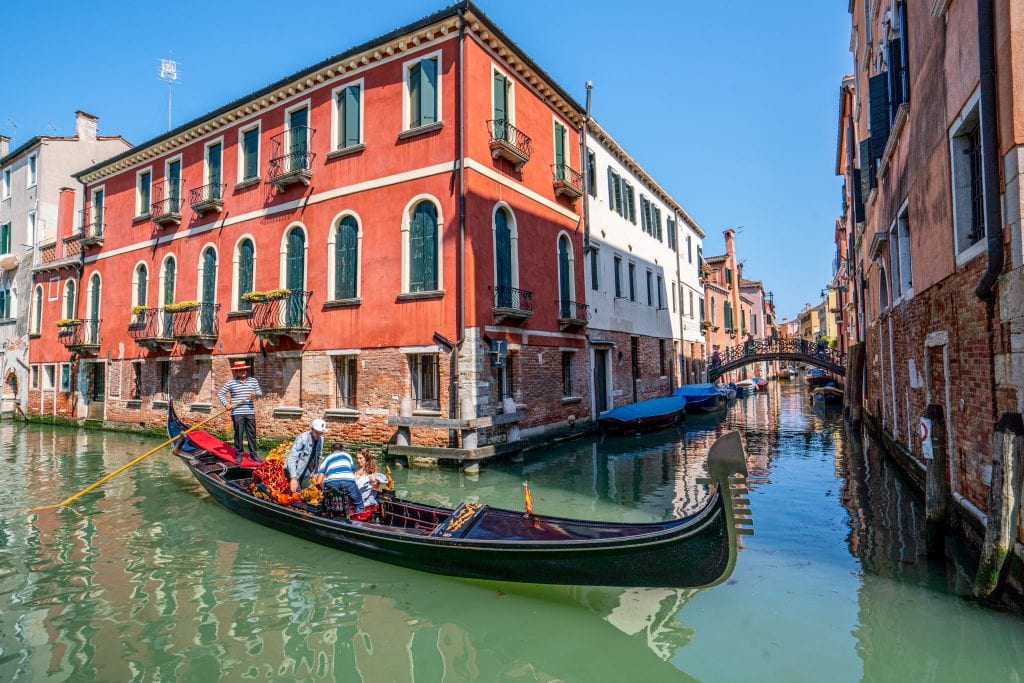 There is an island dedicated entirely to being a cemetery.

San Michele Island is an active cemetery to this day, and while tourists can visit, it needs to be done respectfully.

Marco Polo was a Venetian.

Born in 1254 to a merchant family, Marco Polo is best known for the book written about his travels on the Silk Road from 1271 to 1295. The legitimacy of his stories has been questioned, but his legend has only grown over the centuries.

READ NEXT
25 Most Instagrammable Places in Venice: Must-See Photo Spots

The first public casino in the world was in Venice.

The Casino of Venice opened in 1638, and it’s still operating today. 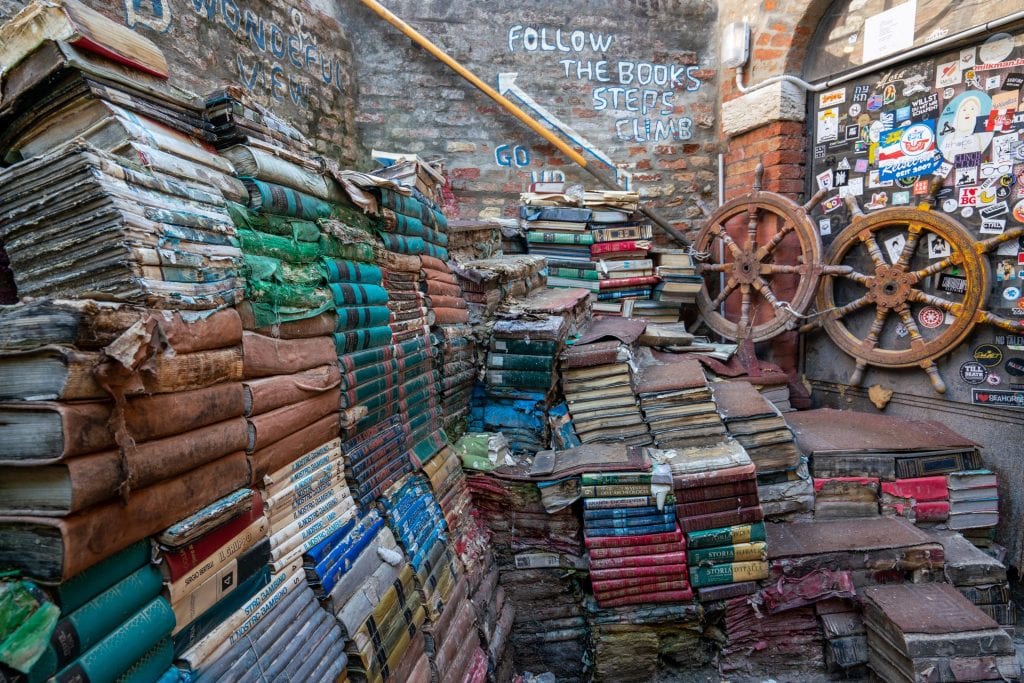 Bellinis were invented in Venice.

One of the best-known fun facts about Venice is that the famous cocktail made with prosecco and peach puree was invented in Harry’s Bar in Venice during the summer of 1948.

READ NEXT
How to Actually Enjoy Summer in Venice (13 Important Tips!)

… but aperol spritzes were not.

Though Aperol Spritzes are associated with Venice, the popular Italian cocktail was actually invented in nearby Padua. 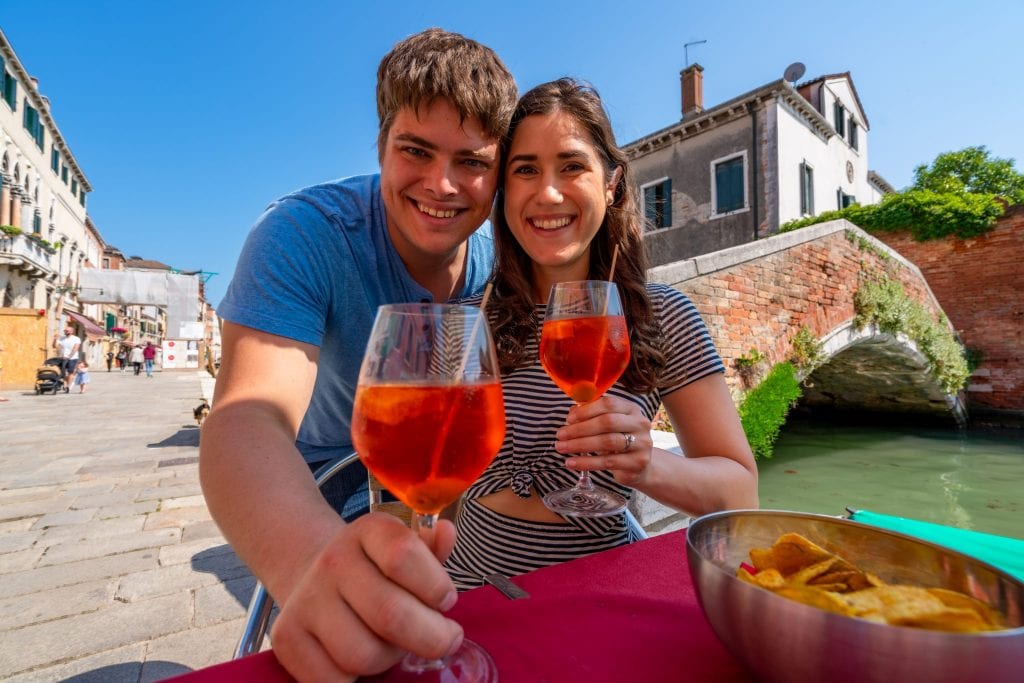 There are far fewer gondolas in Venetian canals now than in the past.

In the 17th and 18th centuries, as many as 10,000 gondolas filled the canals of Venice. Today, a mere 400 or so remain, virtually all used for tourism purposes.

READ NEXT
One Day in Venice: How to See Venice in a Day

Venetian masks have a long history.

Traditionally, masks were worn during Venice’s Carnival to allow people to conceal (at least technically) their identities when they were taking part in any manner of non-Church-approved activities in the days leading up to Lent.

Because of this, one interesting fact about Venice is that masks were actually illegal at certain points in the city’s history!

Today, they are a popular symbol of the city and range in quality from plastic versions sold to tourists to intricate works of art that cost thousands. 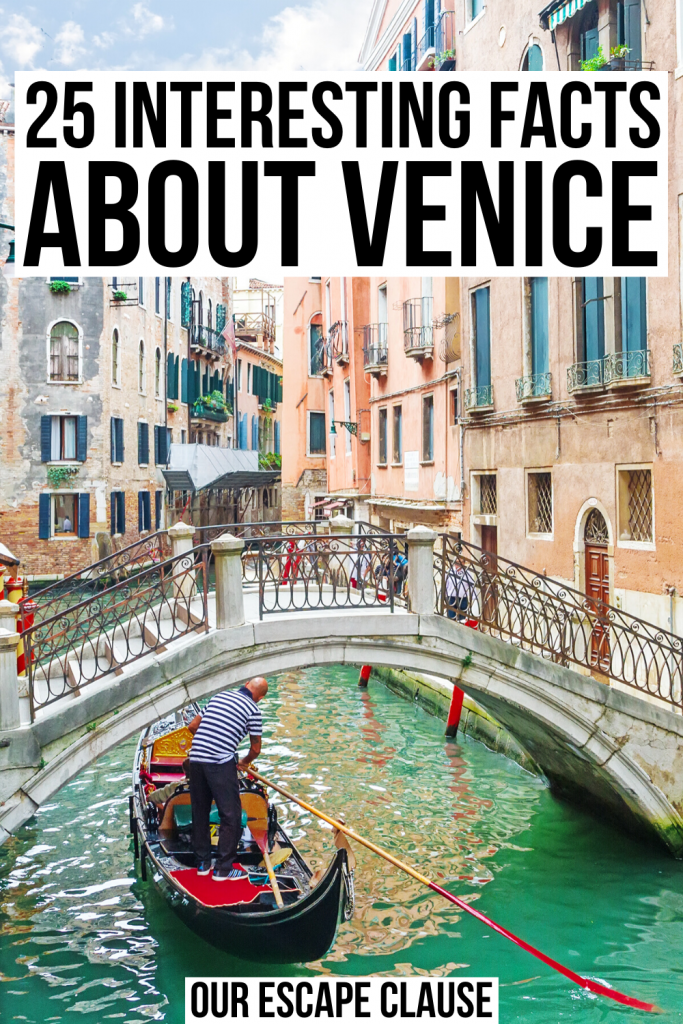